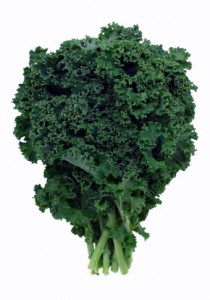 Locally-grown Kale is this week’s Fresh Pick of the Week from the Coachella Valley Certified Farmers’ Markets. Kale is a dark green (and sometimes purple) leafy vegetable that is filled with all sorts of vitamins and nutrients – beta carotene, Vitamin C, Vitamin K, Sulforaphane, lutein, calcium, manganese, carotenoids, flavonoids and fiber – to name a few. Kale is a form of cabbage, although it does not form a head like modern forms of cabbage. It is also, like cabbage, a close relative of Broccoli, Cauliflower, Collard Greens and Brussels Sprouts, and contains many of the same cancer-fighting nutrients and cholesterol-lowering abilities as its cousins. In Kale, though, they are found in a much greater supply. In fact, it’s fair to say that when it comes to vegetables, Kale is quite a nutritional powerhouse. Move over, Spinach. Popeye may be choosing Kale from now on!

Kale has been cultivated on multiple continents for thousands of years. Although its actual origin is unknown, it is believed to have originated in ancient Asia (where it is still a popular ingredient in many Asian cuisines). Kale was eaten regularly by the Greeks, and later by the Romans as well. Wandering bands of Celts, who prized Kale as a food source, introduced it into Europe, and European immigrants later brought it with them them to North America. Today, Kale exists (in one variety or another) pretty much throughout the world (except in Antarctica), and is considered one of the world’s most important vegetables. It can be eaten raw (in salads), steamed (which actually increases its cholesterol-lowering abilities), sauteed or boiled. Recently, chefs have even begun baking Kale leaves into crispy and nutritious Kale Chips!

Did You Know: Many of the more colorful varieties of Kale have become popular as ornamental plants, both for their vivid colors, and for their ability to withstand Winter’s freezing temperatures. Garden Shops often market these Kale varieties as Ornamental Cabbage. They look great in flower beds, but the best part is that all of these ornamental varieties are edible, tasty and nutritious. Moreover, their leaves are said to be even sweeter when gathered after a frost!