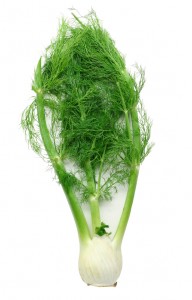 Fresh Fennel is this week’s Fresh Pick of the Week from the valley’s three Certified Farmers’ Markets. Fennel is a hardy, perennial herb with bright yellow flowers, and delicate, feathery green stalks and leaves. A cousin of anise, carrots, dill, parsley and parsnips, Fennel is highly aromatic, with a mild anise-like flavor. Florence Fennel, also known as finocchio, is the variety available at the Certified Farmers’ Markets, and the one with which most consumers are familiar. Florence Fennel is a cultivated variety of Fennel, and is popular because of its distinctive leaf base, which forms into a tight edible bulb.

Fennel is indigenous to the coastal areas of the Mediterranean Sea, where it still be found growing wild. But the herb has been known and consumed by humans for thousands of years, and has become widely naturalized in many parts of the world. Over time, Fennel has become a mainstay of many culinary traditions, including those of the Indian subcontinent, the Middle East, the Mediterranean, the British Isles, Northern Europe and North/Central America.

Did you know: In many parts of India and Pakistan, roasted Fennel seeds are consumed as an after-meal digestive and breath freshener called mukhwas.

View Our Farmers and Vendors